THE PROJECTS THAT MADE US: GIANT TRINITY, 2007 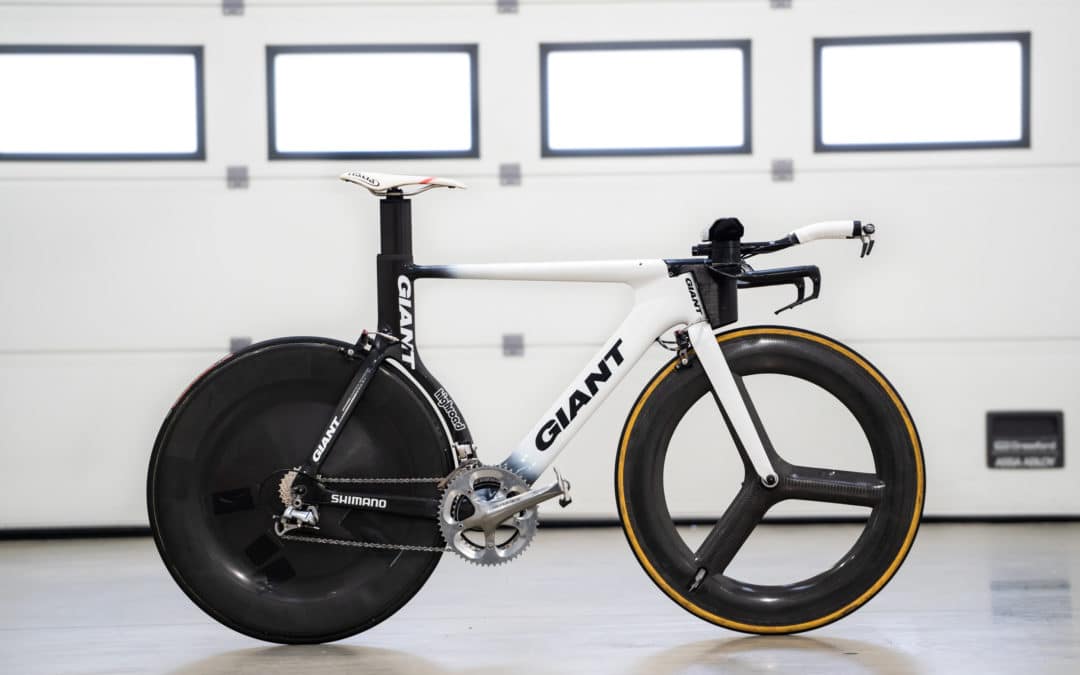 Right from the beginning, Drag2Zero has been involved in exciting development projects with top cycling brands seeking an aero advantage. The products that arose from those projects now stand as milestones in aero evolution, their influence still felt a decade later. In this series, we talk to founder Simon Smart to get the back story on the projects that made Drag2Zero, and where better to start than with their first bike project – the now iconic Giant Trinity.

In 2007, riders on the T-Mobile team were unhappy with their supplied Giant TT bikes. Lars Teutenberg, the team’s technical director, contacted me when I worked at Red Bull F1 and we got chatting about aerodynamics and stuff. About six months later I left to set up Drag2Zero, with a focus on aero fitting, and emailed him to let him know.

Lars called me from a team meeting in October and said “Can you design a fast bike for us? It needs to be done in six weeks and I need an answer right now.” I never forget him saying, “I’ve told them you’re a great bike designer. I’m sticking my head out of the train window here, so it had better be good.” I thought, ‘Yeah, let’s give it a go.’ So credit to Lars, he got me the opportunity to design my first bike, and also to Tom Davies and Andy Wolny at Giant who trusted us with this project.

There was never any intention for it to become a production bike. The project brief was to make a prototype TT bike purely for the team and it was done reluctantly by Giant under pressure. It will always be one of my most memorable projects. It was all done very quickly on a very small budget, and there was no input from Giant initially. Lars put his neck on the line to prove what could be done. Our target was to equal the Cervélo P3.

We bought a Giant frame, chopped it up and stuck in new foam sections that we’d made in our shed. That first iteration was very rough but we showed Giant that we could find significant gains, when they hadn’t believed that aero made much difference. 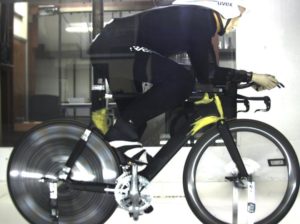 We had to source a wind tunnel and work out how to test bicycles, which we’d never done before. It was crazy, really, just me and Paul ‘Wal’ Welsby, a trusted ex-F1 friend and a technician at D2Z from day one. We were learning all about the instrumentation and test process. Coming from F1, where we had up to 100kg of load variation, here we were chasing grams. That was a whole new thing, but we were confident that it was stacking up.

We refined a lot of the tube shapes.  We found the toptube benefited from being very tapered and fileted behind the headtube to prevent any roll-up of airflow and losses. I’ve always loved that feature of the bike because it’s quite aviation in style. Even now I still love that bike.

I often wonder whether what we did was quite old school because we ended up moving away from it. Things like the rear wheel well – a lot of work went into the shape of that. The P3 was the first one to arch around and closely shield the wheel. We took it a step further with a vertical seatpost and our own shape.

The Giant was the first bike to have an integrated front end with internal cables. There was no consideration to how easy it was to build the bike, we just thought “Let’s route the cables in the handlebars and down through the frame so they’re out the wind.”  If anyone had asked how that would work at races we’d have simply said “Ah, that’s the mechanic’s job.” To be honest, it was a nightmare to build those bikes but they did it.

Looking back on it I was pretty spoilt from working in F1. I wanted everything, no expense spared. The brakes were a weak point. We wanted to enclose the brakes but there wasn’t the money to do that. We worked closely with Andy Wolny at Giant to make sure they could actually make what we designed – there’s no point being radical if they can’t manufacture the thing.

A big influence from my previous 10 years in F1 was the way I’d learned to look at regulations and squeeze the most performance from them. You have to be a bit of a lawyer, interpreting the words in a way that enables more performance. One of the loopholes I saw was that we needed to keep the aero sections of the frame to 3:1, but it didn’t mention handlebars so I did a 6:1 ratio handlebar. It was passed by the UCI and was fine. Similarly, the headtube was 3:1 but the nosecone made it almost 7:1, and again it was accepted by the UCI. It became a pretty iconic bike, it really stood out.

THE RESULTS AND LEGACY

The first six bikes finally arrived two days before the National Championships weekend in June 2008 and team riders won six national TT titles.* Until then Giant really didn’t believe it would make any difference, but I did get an email from them to say congratulations. Then it was a rush to prep more bikes for the Tour de France and that’s where the Trinity really got noticed by the press. With its big nose cone, many were like, ‘Whoah, what’s that?’ Kim Kirchen was second to Stefan Schumacher in the Cholet TT and inherited the win after Schumacher was busted and banned for drugs.
*(Bert Grabsch, Germany; Edvald Boasson Hagen, Norway; Adam Hansen, Australia; Kim Kirchen, Luxembourg; Marco Pinotti, Italy; Frantisek Rabon, Czech)

I’ll never forget riding it for the first time at the Tour. It had that instant feeling of wanting to go forwards. I should ride it again; I still have the one that Kirchen rode to win that Tour TT. For a year we had a great bike, and then Fabian Cancellara rocked up on a new Specialized Shiv that pushed the nose cone idea even further and it all got banned.

The Trinity is still very competitive on calm days because it was developed primarily at 0˚, and we checked it at 5˚. After that I think the industry went too far towards favouring higher yaw angles, but the Trinity did see flow separation earlier than other bikes. At the time it was my first experience of bike products and I didn’t really think about wind angle. It’s still a much-discussed question now and I feel like we’re going back towards favouring lower angles. What we’ve learned is how dynamic the wind is – higher yaw angles occur in oscillations. You might be able to record a total of two minutes of 15˚ wind angle but it could be that on every occasion it was only at that angle for 0.2s. Because of the hysteresis of the air flow, you need several seconds for it to settle and become attached, so you’re never actually going to see that steady state high wind angle that many bikes are claimed to have been designed for.

We’ve still got the mannequin. I remember going round to Wal’s house and seeing him wrestling with all these mannequins he’d bought from a shop. Back then, nearly every bike was developed in isolation and I don’t remember anyone else using mannequins at that time. My philosophy is that it’s all about the system – we had to have spinning wheels and a mannequin. We had to design the rig to do that in addition to the bike within the six weeks.

It was an exciting start to Drag 2 Zero, figuring out the wind tunnel and fabricating bits in a shed. It was almost like being back at university doing a final year project. We learned so much and in the space of that six weeks I was sucked into a world that I’ve been working in ever since. One of the first things I thought about after developing the Trinity was, ‘Wouldn’t it be great to develop some wheels that really talked to the frame’, and that’s what we ended up doing in 2009 with ENVE.

On the morning before the Tour TT at Cholet, Giant announced that they were switching to the Rabobank team. Moments later all these Rabobank riders appeared to check out the bikes that they’d be riding the following year. 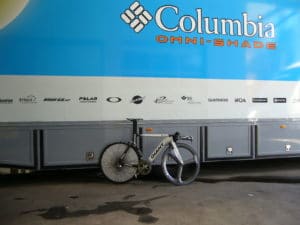 Straight after the race, Bob Stapleton, the Highroad team owner, asked me “Can you do another one?”
He’d signed a new deal with Scott for team bikes. He said, “I need you to do all this again, for Scott, next year. This time there’s a proper budget.” And that’s another story. 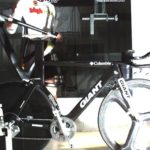 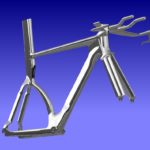 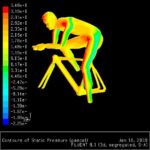 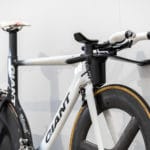 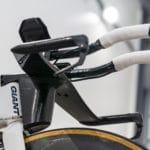 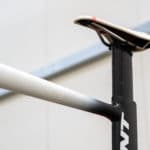 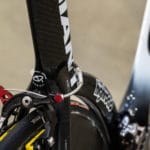 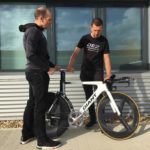 Simon Smart and Lars Teutenberg revisit the Giant in March 2019 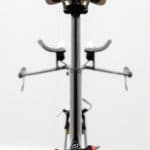 Designed to slice through the air. 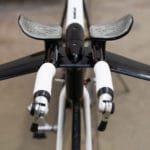 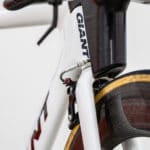 We didn’t integrate the brakes – not enough budget on this project. 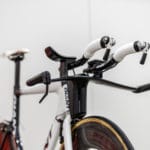 Soon to be banned nosecone 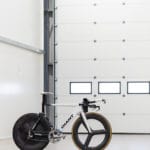 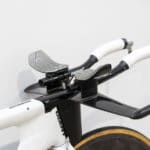 For as long as our supply chain is not affected, we will be accepting and fulfilling orders. We are taking our responsibility to the people who work for us and those in our local community seriously.  To protect them we plan to despatch orders once a week, so it may take you a little longer than normal to receive your order -  we will send you an email when we have sent out your order. We want all of our customers to stay safe and sane during this really difficult time and believe that cycling can help with this. If you are fortunate enough to be permitted to cycle outside, please do so safely and responsibly following local guidance. Thank you all for your custom.